The John Tindale Exhibition and Film

A year long exhibition and documentary film are being staged at the Whitby Museum opening in July and running for 12 months and titled ‘30 years of Whitby history - through the eyes, ears and lens of David Tindale’.

John Tindale’s 100th Anniversary is in 2021. He was for many years a chemist and professional photographer in Whitby. He worked in the family chemist’s business started by his father, Charles, for a short period including collecting film for processing from customers on his bike before going to university and later seeing service in the Second World War. At that time, it was common for chemists to have a photographic side to the business and John opened a studio and pharmacy in Skinner Street in 1947. Much of his commercial work was commissioned by local public bodies which resulted in an extensive record of the re-building of Whitby. He also worked for many years as a freelance photographer for the Whitby Gazette chronicling the social life of Whitby and its citizens. Throughout his professional life, he was a member and keen supporter of the Whitby Photographic Society and Whitby Lit & Phil, whose Annual Report he edited for many years. A large collection of his prints from the 1950’s onward, taken for the Whitby Gazette, were donated to Whitby Museum after the newspaper was sold by the original owners, the Horne family, in the 1980’s. They record post-war changes to social life in the Town as well as much re-building. The museum also retains his comprehensive record of the local fishing industry during the 50s and 60s. Before his death in 2001, John Tindale gave to the Museum his library of negatives dating from the 1950’s until his retirement in the late 1970’s. However he was deeply involved in many other aspects of Whitby’s heritage. He was a founder member of the Whitby Endeavour Trust and it was his original idea to get the Endeavour built in Australia and latterly the visit to Whitby of the replica Endeavour; he was involved in the start-up of the North York Moors Railway as PR Officer; he wrote and published many books; and he created a library of audio interviews of local personalities, amongst many other things.

The exhibition will celebrate his lifetime and his achievements and will showcase the 50’sand 60’s in Whitby.

The darkrooms at Caedmon College were recently used to create a darkroom environment similar to the one which John had used. The photos show John being filmed with the appropriate photo enlarger which was borrowed from the Beck Isle Museum in Pickering. 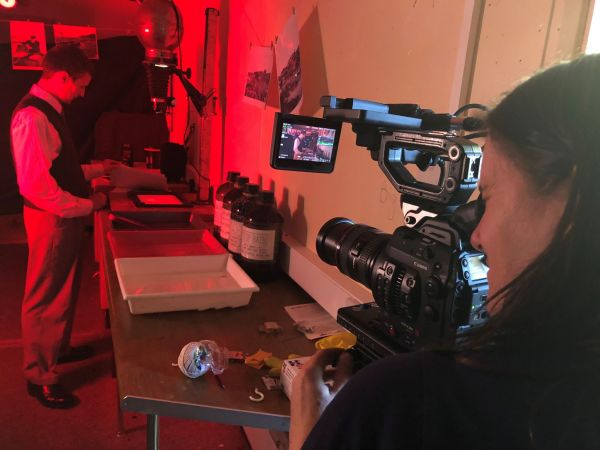